I suggest you watch the performance link first, then read the article, then go back and watch it again… see if your vision of the piece has expanded! 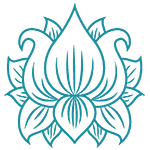 Indian classical dance Abhinaya is non-linear storytelling in which fragments and symbols are given to us (as viewers) to construct meaning through our own processes.

While watching an abhinaya the audience simultaneously co-creates the story, filling in the gaps between symbols with their innermost imagination, grasping at clues suggested by the dancer, the music and the larger arcs in the performance context.

Collaboratively everyone present is involved in the act of creation.  The terming of some audience members as rasika (one who savors rasa: aesthetic experience) suggests that those who enter the aesthetic field (either as performer or audience) require prerequisite knowledge and more importantly, a willingness to participate.  Indian arts thrive on deep investment and creative skill in the audience which would deem them to be rasika, therefore it is common practice in India since time immemorial to honor and acknowledge the audience with respect.

Indian classical dance choreography centers itself around abstract themes such as spiritual poetry (as in Abhinaya) or musical rāga (such as in odissi’s  Pallavi choreographies) and then adds layers and layers of symbolism to develop dimension and depth.  This is theorized in the prominent chapter of Natya Shastra on bhava and rasa which defines the term ‘staiye bhava’ for the larger and more tangible theme of a piece, such as rati (the romantic) for a love story.  Drawing out the rich and delectable essence (rasa) of love, variations and complexities are layered into a choreography through sañchārī (elaborations often through metaphor) which are believed to strengthen the staiye bhava (theme).

One of the truisms of love celebrated by the Indian Aesthetic is: love cannot exist with out longing. Separation and union are but 2 banks on the river of love.  Separation therefore deeply enhances the experience of love.  This is is epitomized in the 12th century poem Gita Govinda about the immortal loving past times of Shree Radha and Lord Krishna.

One of the most beautiful examples of romantic abhinaya choreography I have seen recently is:  ’Kisalaya Shayana’  choreographed by Sarupa Sen, performed by herself and Bijayani Sathpathy.  The particular video shared here provides only excerpts of this wondrous performance based on an episode of exalted romance from the Gita Govinda: Radha is overwhelmed with shyness preventing her from gazing directly at Krishna.  She is coaxed by Krishna’s loving words to place her lotus like feet upon a freshly arranged bed of leaves and take ‘rest’ with him. 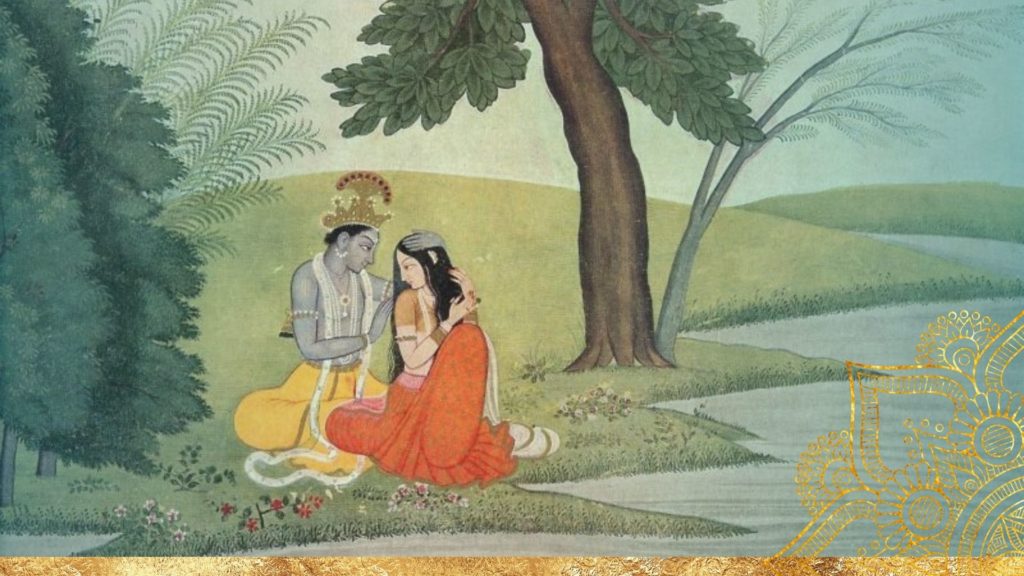 LET’S EXAMINE ELEMENTS OF THIS CHOREOGRAPHY…

From the first note, the bansuri flute sets the unmistakable tone of love.  The wafting delicate breath of the flute fills the space with tenderness and the blue light begins to reveal an evening intimacy that isolates the lovers from all other worldly concerns.  The duet emerges, facing opposite directions on opposite ends of the stage, their gaze describes distance between the two and the pain that it causes.

Slowly as the lyrics form, the dancers begin moving – writhing and wringing in spiraling movements that suggest torment of the sweet variety.  The staging of the dancers far apart, first moving individually, then synchronized, visualizes the state of physical separation between the two, yet demonstrates their complete inner synchrony of ‘the lover and the beloved’.

The tension has already been built and we are just one minute in!  Slow, fluid, controlled movements, then with one broad lunge towards each other that stretches a line of tension diagonally across the stage, they face one another for the first time: heads tipped back with both hands in mayura mudra held up to the mouth as if they were both drinking nectar.

With heaving chests, undulations and curvaceous postures the dancers continue to move in synchrony, yet distinctly separate.  They seem to be speaking together – with their bodies, yet their gaze strictly focused far apart.  In perfect unison they strike a pose.  I am holding my breath waiting for them to move, to finally unite…  Bijayani (portraying Krishna) begins to slowly turn her head to glance behind at Radha (Sarupa), unable to complete the gesture as if the glance would be too potent, ‘Krishna’ extends a leg behind while Radha extends her leg forward.  The feet at the end of the graceful legs almost make contact… they step closer together and heave with a sigh and release of tension, sinking into tribhangi synchronized together, yet still separated in gaze. 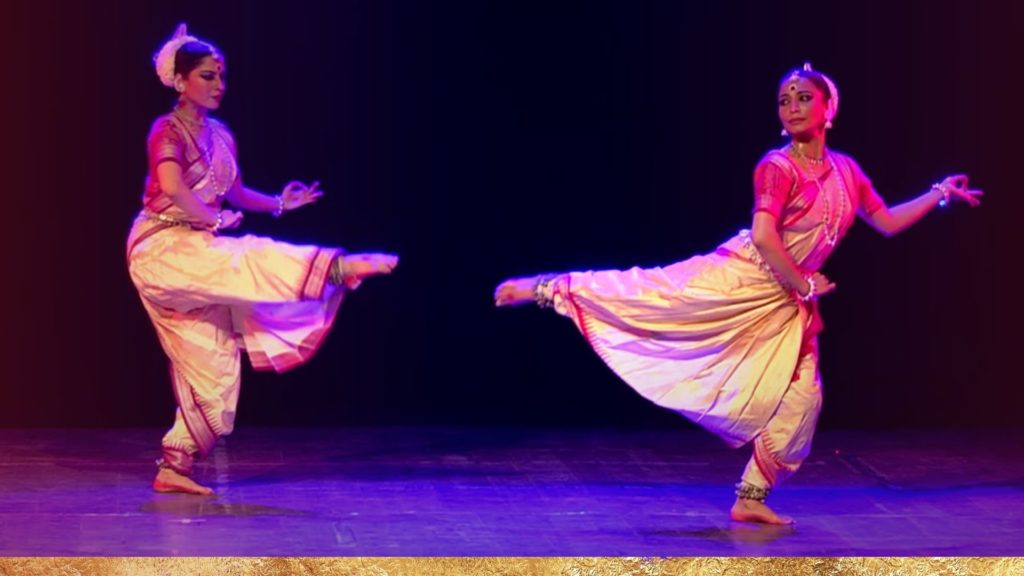 The dialogue continues, but in a curious opposing directionality. Krishna (Bijayani) warmly addresses Radha through distinctly codified mudra with clear facial and body expression: “Come rest your lotus like feet on this soft bed of leaves…”.  She is speaking to an invisible Radha at downstage right with pleading glances and swirling hands in lotus shapes, while the ‘real’ Radha (Sarupa) is intimately reacting to each word Krishna says positioned upstage, behind him.

The result of the two characters facing the audience rather than each other in an intimate exchange at once draws us into the scene and heightens the inner excitement of the characters about to unite (but still separate).  We delve into the ‘about to unite’ (a climax of separateness) and are asked to contemplate the characters – separately, at the same moment.

Later as the tempo increases, the gait also lengthens and rhythmic footwork increases in complexity as if sprinkling the scene with the pure unassociated joy of dance – a relief to the tension which has built.  They begin to move about the stage playfully teasing the tension of erotic possibility hanging in the air.  Finally as they unite and entwine in a ‘Radha Krishna’ pose familiar to the Indian aesthetic, the movements thicken with tension and slow to a halt allowing a ‘kinesthetic pause’ for us to contemplate the layered meaning in Jayadev’s poetry and the very meaning of Radha and Krishna.  An eternity would not be enough to contemplate the symbolism of ‘the lover and the beloved’, the devotee and God, but the intensity of live actors holding the contemplation in their bodies for us has built up the potency of the rasa and opened the allowance for us to possibly experience this kinesthetically rather than cognitively.

As I watch the dance I notice my own breath suspend and release in their well metered oscillation of union and separation, tension and release, threaded together with movement quality distinct to the Nrityagram style – suspension.  Recently in a workshop with Sarupa Sen we explored her attention to suspension as she broke down a commonly known step, yet had us play with the suspension between steps to expand on the transition rather than the point A and B which is commonly emphasized in Odissi’s distinct poses.

The climax emerges, pronounced by powerful drumming with increasing tempo and the melodic chanting of these characters ‘holy’ names names Narayana and Radhike… Krishna leans forward into a sculpturesque pose.  Bijayani’s hands shimmering in bramhara mudra (denoting the excited honey bee) flutter around Sarupas hands held in alapadma. Krishna (symbolized as the thirsty bee) drinks rasa from the nectar filled flower that is Radha.  They hold this pose for a distinct period of time, allowing the image to deeply impress upon our minds.  The thrill, excitement and relief of conjugal union, indescribable and ever so intimate, is suggested here through this creative imagery.  The metaphor leaves immense space for us to ‘fill in the gaps’ with our own flavors, preferences and imagination.

Summarizing a few of the choreographic tools used to reinforce the staiye bhav (over arching theme – love) and the sañchārī variations within love I have mentioned following:

1 thought on “Reading an Odissi Abhinaya”